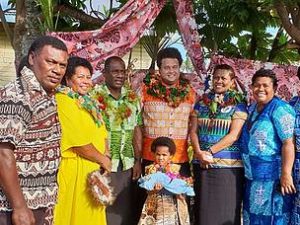 Access to clean safe and consistent water supply is now a reality for villagers of Naisisili, Yasawas, after the installation and hand over of the villages’ first solar powered water pump.

The solar powered water pump will bring much relief to the community as previously; the villagers had to rely on the 42 water tanks and nine wells at their disposal.

“The borehole for the village was discovered way back in 1993 by the Minerals and Lands Department and we have been waiting so long to get connected, but we are indeed thankful to Turtle Island Resort for coming to our plea and providing us with a solar powered water pump.”

“During the dry season, sometimes these wells dry up and our water tanks are empty, so this pump is a life saver for us,” said Naisisili Turaga-ni-Koro (Village headman) Ratu Inoke Ratukula.

The solar powered pump was donated by Turtle Island Resort as part of their community contribution to the vanua (people).

“These are our neighbours, we can’t sit back when water is such a necessity and needed by the people, we are blessed to have the opportunity to be in a position to be able to help, with great privilege comes responsibility, we will look at assisting villages that need water and Vuaki is next on our list,” said Richard Evanson Junior of Turtle Island Resort.

“Turtle Island has always had a history of supporting our community, recently when droughts occur, water had to be carted to these communities so that inspired us to think if there is a better solution where we can use some of our resources to go and help these communities consistently. After a survey here, we realized they just need a pump and solar panels to power it and expertise to put it all together the entire investment was around $20k.”

Naisisili village consists of 67 households with a population of 267.

“Women use the water for cooking, washing, bathing and drinking and we have to struggle, sometimes drawing the water from some of these wells, as you have to pull the bucket of water up, now, we can get water from just switching the tap on. We are indeed thankful and happy since it is easier for us in terms of access to water,” highlighted Naisisili village’s women’s representative, Lavenia Drau.

“I have been here for 30 years and a few women longer than me and we all knew we had a bore hole but the authorities back then didn’t connect pipes and a generator for us to use the bore hole. Finally we are now connected through the pipes and taps within the village. Water is a basic necessity and we are grateful and happy to have access to such basic necessity,” said Rinavani Naivalu of Naisisili village.

Nacula district representative, Saimoni Naivalu, highlights of the seven villages that make up the district, two communities that are badly affected by water issues are the villages of Naisisili and Vuaki.

“Naisisili has one bore hole, nine wells and around 42 water tanks. Vuaki village has one well, around 30 water tanks and one bore hole in which their solar powered water pump is currently under repair, these two villages are the worst affected when it comes to access to water compared to the rest of the villages and it is even worse when it comes to the drought season, so we are thankful to Turtle Island Resort for coming forward in assisting with a solar powered pump,” Naivalu said.

Naivalu adds that the developments taking place, is linked to the districts 20 Year Sustainable Development Plan 2018-2038 and that stakeholders such as Turtle Island Resort, Corporates and government will be approached to fund and support further developments for the district.

“There are many developments taking place in the district, as we speak, Yaqeta village is currently having their 90 households get connected to the grid via solar panels. Nacula now has almost 60 water tanks installed and next month will have each household connected to the main water line that is connected to the village’s water catchment.”

“Vuaki village has around 40 water tanks now whilst Matacawalevu also had water tanks installed, Turtle Island Resort will be assisting the village with a generator powered pump to use in the meantime and at the same time cover fuel costs as well. Development is already slowly underway for the district and our sustainable development plan is the guide for us,” revealed the Nacula District Representative.